The Release Date of an album is a crucial metadata. Although it seems like a simple data, it is not, and is often misunderstood and misused.

Let’s have a closer look, and try to understand what is behind a Release Date of a music recording.

Physical Release Date: This is usually the oldest date a recording can have, back in the physical age. It is when the album / track became available to the public on a physical medium (i.e. not the recording date)

Digital Release Date or Release Date: This is when the same track / album became legally available in the download / streaming industry. One of the oldest platforms is the iTunes Store back in 2001.

Everything looks simple, no? Let’s have a look at this Discogs page about the album Pet Sounds from The Beach Boys: 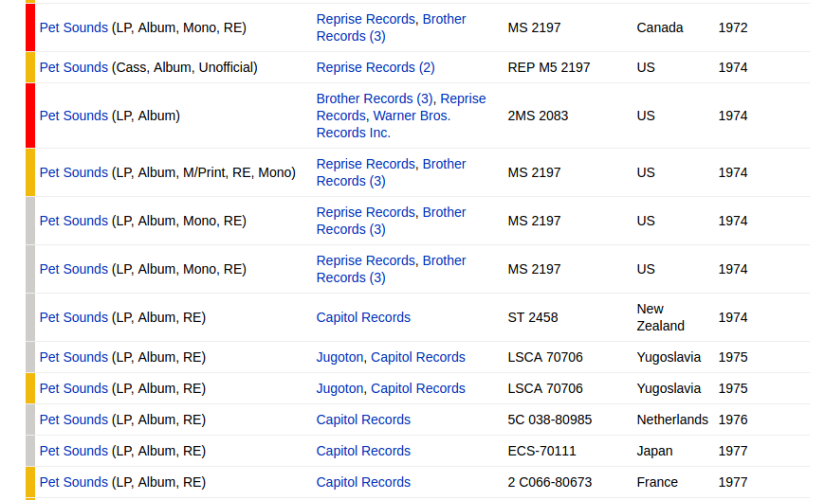 The last column is the release date. In the first column you can see different mediums like LP, Album, Cass. The penultimate column is the Territory.

Pet Sounds has been released in 1966, and the main rows of this long list are obviously referring to that year without ambiguity. However, if you consider the format, the territory and the label, a release date can take on several meanings, adding confusion.

Complexity in the digital age

Now, let’s consider a small group / artist who released one song on Youtube and some streaming platforms at date A ; adds 3 tracks on date B where track 2 and 3 are release at B + one week on a wider range of platforms ; and releases a physical “single” with a label. Question: what is the release date of the single?

You got it, although we like the idea of a unique and simple Release Date as we imagine it from the Golden Age of the music, today’s industry does not give us the chance to consider it (our mind does however). Not to forget that the industry is widely based on track rather than albums (or EPs, Singles, …), which often have separate lives.

Spotify simplifies slightly the problem displaying only the year (like Discogs) rather than the month and the day. Generally a separate track, an album and a single are released within the same year.

Some releases are in fact a re-edition of an older release, or a re-edition of older tracks compiled together. If one label re-edit old tracks (let’s say in the public domain) from albums with dates A, B and C in one single “album” release (a compilation), then what should be the release date of such an album?

In the digital age, re-editions and compilations are very common, as they are very cheap to create. Such releases impoverish the general concept of a release date.

The Release Date is initially sent by the provider (the label). It is of a great importance that its releases are well ranked on the platforms, and in case of doubts, the provider will prefer putting the date of today than the date of the oldest released track from the album for example. Besides, it totally makes sense concerning the Digital Release Date.

Quality re-editions, which has been existing for a long time from the physical industry, are made to renew an old content. After some remastering or not, it boosts sales of an old content. One could think that it is created in the explicit objective to renew the Release Date and put it in the new releases sections. From this marketing point of view, it would be a nonsense to display (only) the original release dates in such cases. The previous Pet Sound 50th Anniversary Edition release is a good example of this (although, in my opinion, giving the Original Release Date would be useful).

We are still quite attached to the idea of describing a release from its release date, as we still do generally for films, books or even music (in the major cases). However the streaming and download industry based on a track rather than an album with frequent use of re-edition and compilation depletes and scramble the concept of music release dates.

Published by Mickaël A